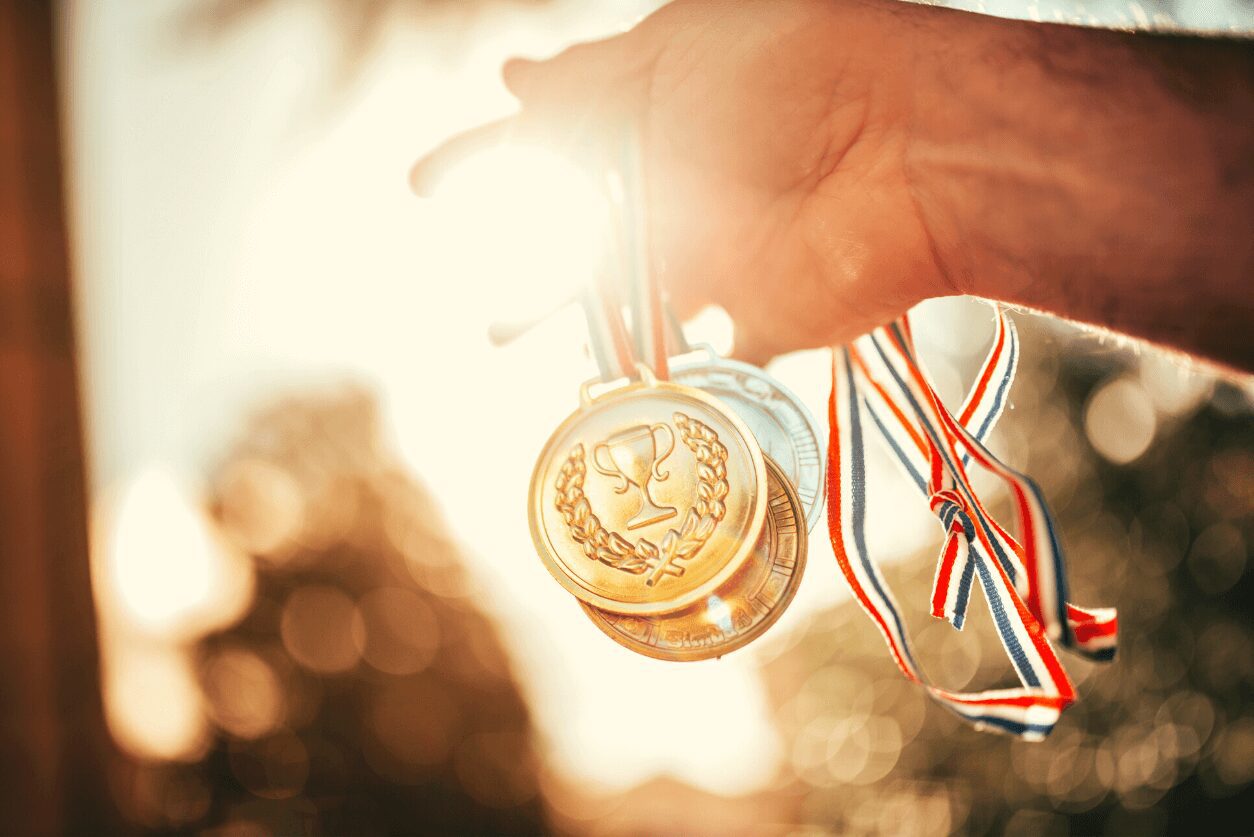 This year’s 2020 Olympic Games held in Tokyo were unprecedented for a number of reasons, not least because athletes competed without a large live audience to cheer them on from the stands due to Covid-19. This just makes their feats all the more remarkable in my opinion. Read our pick of inspiring stories with corresponding “word clouds”. Using word clouds is a great way to memorise new vocabulary. Try it yourself by mapping key words and phrases from a news story.

Challenge yourself by completing the short language quizzes in each story (answers below this post).

Falling and getting back up again

Challenge: Identify the phrases in this post with these meanings:

I was so inspired by Dutch long-distance Sifan Hassan who fell while running the 1,500-metre preliminary heat at this year’s Olympic Games – and the final lap at that! A runner in front of her fell, causing Ethiopia-born Hassan to stumble. Undeterred, 28-year-old Hassan got up and “broke out in a dead sprint”, writes The Washington Post.

Not only did Hassan win the heat, but she also went on to compete in the 5,000-metre final, just 12 hours later. Despite experiencing exhaustion and “pain everywhere”, according to The Financial Times, she emerged victorious and took gold.

Her feats did not stop there. Hassan also won the 10,000m. Unfortunately, she came up short of winning gold in the 1,500m finals, but she can be proud to take home two gold medals. This makes her the second woman in history to complete the long-distance track double, in spite of the punishing Tokyo heat. Hassan left Ethiopia as a refugee at 15. She made her mark in running at the young age of 18 and has since shone on the international stage. “Ups and downs make you stronger. It’s about getting up and moving on,” she told Reuters.

Another inspiring story from this year’s Olympic Games has to do with two high-jumpers, Gianmarco Tamberi from Italy and Mutaz Barshim of Qatar. When the two athletes tied, the logical next step would have been a tiebreak. Instead, they asked if it would be possible to share gold. When the official agreed to this, the athletes – who are also good friends – were ecstatic and whooped for joy.

Spectators were awed by the gesture, calling it a display of true sportsmanship.

It has been a difficult road to this year’s Olympic Games for many athletes, including Tamberi. I love the photo of him at the Olympics, smiling and holding the cast he wore when he broke his ankle just days before he was set to compete in the Rio Games. It was a devastating blow.

Tamberi wrote “Road to Tokyo 2020” on the cast to encourage him to focus on working towards the Olympic Games while his ankle healed. Only, that didn’t happen either… So, he crossed out “2020” and wrote “2021” next to it. (As a matter of interest, it was decided to retain “2020” for this year’s Olympics due to the substantial sum it would have cost to redo already manufactured merchandise).“I was told in 2016 just before Rio that there was a risk I wouldn’t be able to compete anymore,” said Tamberi, according to Sky Sports. The pandemic postponed his dreams yet again. Finally, this year he achieved his goal – not alone, but with a friend.

A year of firsts

Challenge: Find the noun for “inspire” and the synonym for “a copy”.

Representing Japan at this year’s Olympics, Momiji Nishiya made her country proud when she won gold in skateboarding last month. Olympics.com called it: “A historic first on home soil.” At just 13, Nishiya is among the youngest gold medal winners in Olympic history. She also made history by becoming the first female skateboarder to win gold at the Olympics. Brazil’s Rayssa Leal, who won silver in this category, is also just 13!

I feel these athletes are an inspiration to young girls interested in pursuing a career in sports. “It’s not right to think, well… you can’t go skating because skating is for boys,” Leal reportedly told Reuters. “I think skateboarding is for everyone.”

Sports are becoming more inclusive. It has been incredible to see men and women compete this year on an even playing field in first-ever mixed-gender Olympic events, including track and swimming relays, judo, and table tennis.

What’s also incredible is that the young Nishiya had her moment in what was the first-ever skateboarding event to be held at the Olympic Games. (I love how they created an imitation street course, complete with benches and rails). Surfing, karate, sport climbing, and BMX freestyle also made their debut.

In conclusion, I think we can benefit from these stories of determination and endurance. If you feel your English study goals have been hampered by the pandemic, hang in there and keep going.

Falling and getting back up again

A year of firsts