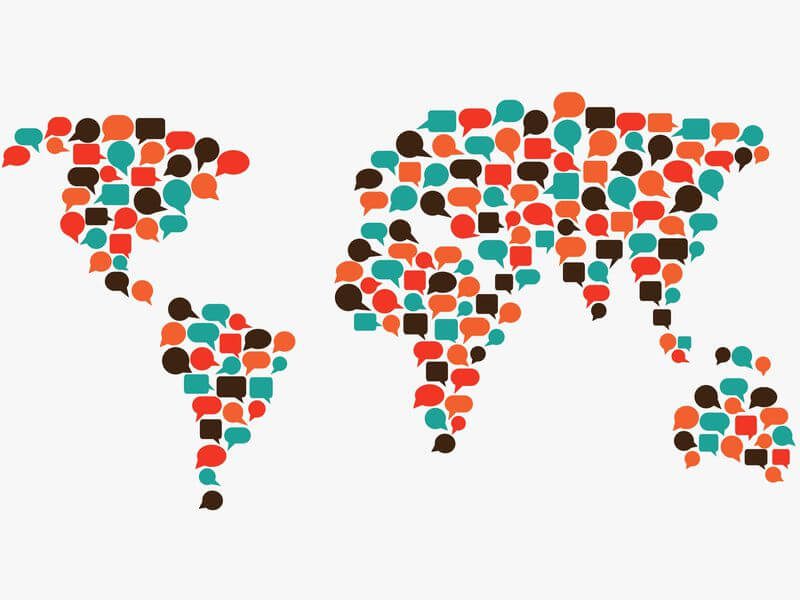 This is an interesting question, because, the very nature of languages is to be a system that is complex and holistic enough to be able to be used as a tool for communication between people. So, all languages are as complex as others, but what one person may view as complex may not seem that complex or unusual to another. This (and much more about languages) is something linguists spend many hours discussing, analysing, assessing, researching and arguing in academia and any linguist will tell you that there is no such thing as ‘the easiest language’ at all!

We will not be going into that kind of detail here, but, if we assume that all languages are fundamentally able to meet the needs of their speakers, then all languages would appear to be ‘created’ equal!

However, the difficulty or ease of learning a different language would surely come from how similar or different the language is to your own native language, or to other languages you may already speak.

If, for example, you speak Spanish and wish to learn English, then one less ‘challenge’ you would have is to learn is the writing system because both languages share the same writing script and/or alphabet. However, if you wish to learn Arabic, as a Spanish speaker you will need to learn a completely new alphabet and writing script as well.

According to GBI, “below are some of the main features of Modern Standard Arabic writing:

As you can see from the above, not only would you be learning all the new grammar, vocabulary, phonetics and phonology, etc etc., but you would also need to learn how to write what will seem ‘backwards’ from your own writing system, and a few other key differences which would take a while to master.

If we take a look at Chinese orthography (rules for writing a language), it seems even further from a Spanish speakers’ writing conventions as the system centres on characters (not letters as Spaniards are used to) . There are many more key differences from Spanish. So, if you ask a Spaniard what is the most difficult language to learn, s/he will undoubtedly say a language like Mandarin or Arabic because it is so different.

An interesting comment written by a Japanese teacher on the difficulties of learning English, but why they would agree it can be more difficult to master Japanese reading and writing can be found here.

Is there a way to objectively find out which languages are easier and/or harder to learn? One way is to look at how long it takes, on average, for a speaker of a particular language, to learn another language. The Foreign Service Institute (FSI) “has created a list to show the approximate time you need to learn a specific language as an English speaker. After this particular study time you will reach “Speaking 3: General Professional Proficiency in Speaking (S3)” and “Reading 3: General Professional Proficiency in Reading (R3)” According to this list, English speakers would find the easiest language Afrikaans (a South African language) and one of the most difficult languages Japanese.

German speakers find English difficult because of a number of reasons, not to mention the absurdity of how different the pronunciation of a word is to its spelling. For speakers of languages for whom this is normal, it will be challenging, but not more so because it is unfamiliar. For German speakers whose spelling and pronunciation is governed by strict rules, making it seem simpler, English is terrible in this regard!

In conclusion to this post, the difficulty (or ease) of learning a language will very much be determined on how closely related the other language is to your own, or one you already speak, as well as what the average length of time it takes for speakers of one language to learn that other language. This means that there is no definitive list of THE easiest and THE most difficult language in the world to learn. However, we may find that many people from a variety of language groups may tend to find the same languages more difficult or more easy to learn.

One of the advantages, without a doubt, of learning English for any speaker, is that because it functions as such a lingua franca today, there are many words you may know already (from television, the internet, news, movies, etc.) or have heard, and many may even stem from your language (remember that English has no qualms about stealing/borrowing from other languages).

If you do decide to learn English as a foreign language, we would welcome you to join us at the UCT English Language Centre where we offer 6 levels (Beginner – Elementary – Pre Intermediate – Intermediate – Upper Intermediate and Advanced), as well as English exam preparation courses. Not only will you receive high quality English lessons, but you get to attend the course in the best city in the world: Cape Town!