The UCT English language Centre is located in the Rosedale Building on the University of Cape Town’s Hiddingh Campus.

Hiddingh campus is one of the satellite campuses of the University of Cape Town located in the middle of the city of Cape Town and is located about 10 minutes’ drive from the main university campus in Rondebosch.

Hiddingh campus is also the oldest University Campus of Cape Town and is home to the School of Fine Arts, Drama, and most recently, ELC.
The campus buildings are rich in culture and history, and the architecture is beautiful. It is also nestled right at the foot of Table Mountain and if you visit Simon and Juliette’s office you will even see the Table Mountain cableway right from their office window!

Monday Monthly did a little investigating and according to Volume 34.01, 25 February 2015, There are a number of very special buildings on Hiddingh campus. This is a brief summary of their interactive map, which you can find here.

As you enter the campus at the main gate, the building you see on your right hand side is called the Michaelis School of Fine Arts and is where all current Fine Arts students at the University of Cape Town study. Both this building and Hiddingh Hall were occupied by the South African defence Force during Word Wars I and II. Apparently, the evidence of this is still there as the timber props used to enforce the stairs because military engineers were concerned the stairs would not manage the weight of soldiers marching in step. This building originally housed the university’s departments of zoology and botany. 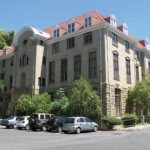 If you carry on walking past the Michaelis School of Fine Arts, you will see, also on your right hand side, the Old Medical School. This was the first medical school in the whole of Southern Africa and was opened in 1912. According to UCT’s Monday paper: “Cadavers dissected in the anatomy lecture theatre entered the building from the back – having passed through a gate used for this purpose only. A lift would take the cadaver to the uppermost floor, where it would be wheeled in to the lecture hall through an entrance on the opposite end of the room from the student entrance. Students did not sit during these classes, but stood on steep steps above their lecturer to get a good view of the dissection. Sometimes a student would faint and come crashing down these steps (fortunately, there are no reports of serious injuries).” Today, it is home to the Centre for Curating the Archive and the Department of Visual and Art History. 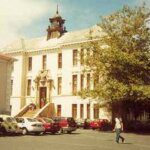 Just opposite the Old Medical Building is a red-bricked, Cape Georgian-style building called Betram House, next to Bertam Place, which actually no longer officially belong to the university. These days they belong to the Iziko Museums of South Africa. However, when it was bought originally by the South African College in 1902, it housed the office of the registrar, The College Library (before it moved to Hiddingh Hall) and the Royal Society of South Africa. It also used to be occupied by the state pathologists. Today, it is used by the Department of Film and Media Studies.
Behind Betram House and Place is a very unique building called the Egyptian Building completed in 1841 which was the original site of an old zoo! This is also the first building in South Africa built for the sole purpose of higher education which were lecture venues. Today, they are used by artists and sculptors as studios. 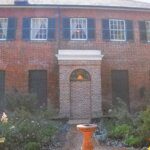 Walking back towards the main entrance, you will pass Hiddingh Hall. Interestingly enough, the plans back at that time were to develop Hiddingh all, and demolish some of the other buildings on campus, but by the time these buildings were built, “the realisation dawned that the Orange Street campus was becoming too small to accommodate the growing university”. Whilst back then it was used for many graduation ceremonies, today it houses the Hiddingh Library and is used for performances and first year drawing. 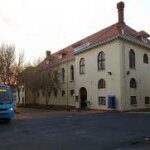 If you continue on down the Avenue, past Hiddingh Hall, you will see the Commerce Building in front of you. This was built in 1906 and has many interesting and beautiful architectural features inside. It was originally home to the Faculty of Engineering, and when they left to head to Upper Campus, it became home to the Faculty of Commerce before art moved in in 1978. Today it is used for sculpture and ceramic studios, as well as drama rehearsals. 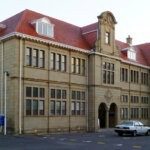 To the right of the Commerce Building, if you are looking at it from the Avenue, are the Little Theatre and Workshop. Originally, these buildings started out as chemistry labs. The architect who designed these buildings also designed our Houses of Parliament where the national Council of Provinces is based. Today, it is home to drama and comprises a rehearsal theatre, offices and department spaces.

If you turn left, and pass the Commerce Building on your right, you will come to The Ritchie Building on your left and Rosedale House on your right.
The Ritchie Building was actually the former home to SACS (from 1896 to 1960). SACS (South African College High School) is the oldest high school in South Africa and the boys shared the grounds with their university going compatriots. The Rosedale Building, where the UCT English language Centre is now located, used to be the accommodation for the boys at the university and SACS. When the schoolboys left to Newlands, their new premises in 1960, the Faculty of Law took over the building before drama, Photography, and most recently, ELC moved in.
Our campus is campus steeped in history and has buildings that all have different, but their own splendid architecture. 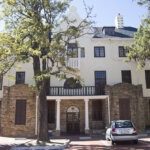 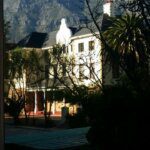 Join us at the UCT English Language Centre and enjoy being a UCT student located on the University of Cape Town’s oldest campus.