Global business has adopted English as its lingua franca - the conventional language to use between speakers whose first languages are different. While these languages have been around for centuries, what makes English as a lingua franca unique is that it is used for this purpose both functionally and geographically. 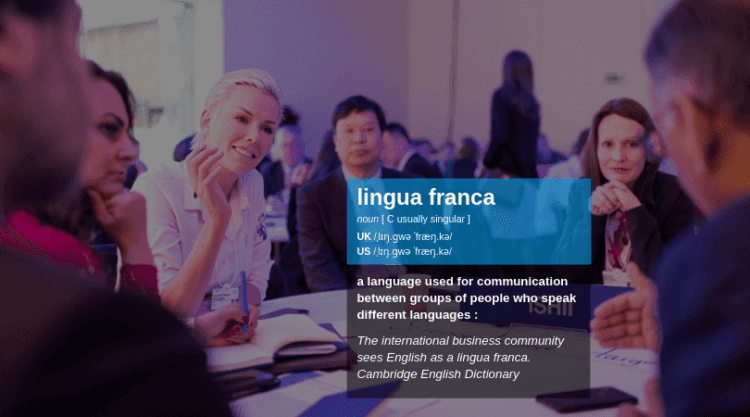 Many multinational corporations have chosen English as a language of intercultural communication with access to the global market. English is also the lingua franca of diplomacy and research, as well as the language of instruction in higher education. In 2003-2004, it’s estimated that 1,500 Master’s programmes were offered in English in countries where English is not the first language. In Europe, which is culturally and linguistically diverse, English is being used more and more as a working language.

Research shows a correlation between ease of doing business and level of English proficiency. According to Cambridge, over three quarters of employers in English-speaking countries judge candidates’ English language skills in the job interview. Even in countries where English is not the official language, employers also conduct interviews in English and check language qualifications from time to time. A similar link exists between English proficiency and earning power.

Tsedal Neeley, an associate professor at the Harvard Business School and author of The Language of Global Success points out, “having business-level fluency in English means that you are capable of conducting business in English without needing someone else to translate or to interpret words for you. You are able to have conversations with co-workers, management, clients and suppliers as well as being able to read company documents and read and write emails.”

Let’s look at some case studies.

Rogerson-Revell was invited by a senior member of a European organisation that represents actuarial associations around Europe (these companies calculate statistical risks) to analyse the difficulties that second-language speakers experience in a business environment. The team consisted of the following nationalities: French, Swedish, Portuguese, Finnish, Japanese, Spanish. As you read the extracts, reflect on whether you or any of your colleagues have ever had similar experiences?

“I was sitting in one of the committee meetings listening to the discussion. Suddenly I thought that the meeting was missing an essential point and I started to plan my response. It took a few minutes to prepare myself, especially to find the right words, and suddenly I realised that the discussion had moved on to another subject.”

Case study 2: Lack of communication in an emergency

Avianca Flight 52 was on a scheduled route from Bogotá, Colombia to New York’s JFK International Airport on 25 January 1990. New York was experiencing severe weather conditions, causing significant delays. The plane was instructed to wait, and the pilot was unable to explain that the plane was running out of fuel. Unfortunately, the situation became critical and the plane crashed. This is one of the accidents Estival examines in her book, Aviation English: A Lingua Franca for Pilots and Air Traffic Controllers. There is never one single cause of an accident, but miscommunication usually plays a role.

Aerospace today has one of the lowest English language skills gaps, and the industry describes English as significant for their work. Pilots and air traffic controllers are required to do regular proficiency tests to keep their pilot license.

English is adaptable to many purposes

Acquiring the appropriate language for a variety of professional, social and intercultural situations is imperative for successful global business communication, particularly across cultures. As a language learner, you need communicative competence, that is, you need to be able to use the language in different contexts. English is about more than just learning vocabulary and grammar. Effective learning is your capacity to use the language confidently and appropriately in real-life situations.

Language experts working in the field of workplace communication have helped to identify many sources of misunderstandings. For example, they have found differences in styles of communication in meetings, conducting negotiations and the use of humour. Their findings are included in business and intercultural training materials. While learning practical skills such as making conference calls and giving presentations, you learn about the world and different cultures too.

Socrates, the 5th century Greek philosopher and teacher, used questioning as a method of teaching students. He believed that “no one is wiser than you.” The main idea was that learners should participate actively in their learning and not trust the knowledge that is passively received. Current theories of language learning adopt this view too – that users construct reality through their use of the language.

Good language learners do a number of things. They are willing to make guesses, take risks, have a strong desire to communicate, listen to themselves speak, transfer things they have learned to new situations, and work cooperatively with teachers and other students in order to develop their language skills.

Learners who participate actively in their learning are the most likely to be efficient and also more motivated. Many complex communication skills can only be developed by actively using the language in natural speech. Autonomy or “the capacity to take responsibility for one’s own learning” goes hand in hand with high achievement. It promotes the lifelong learning necessary to achieve long-term goals.

“Autonomous learners gain their own voice and become authors of their own story.” – Penny Cook

For educators, there can be nothing more rewarding than empowering you with the language skills that lead you to gain your unique voice and to become the author of your own story.