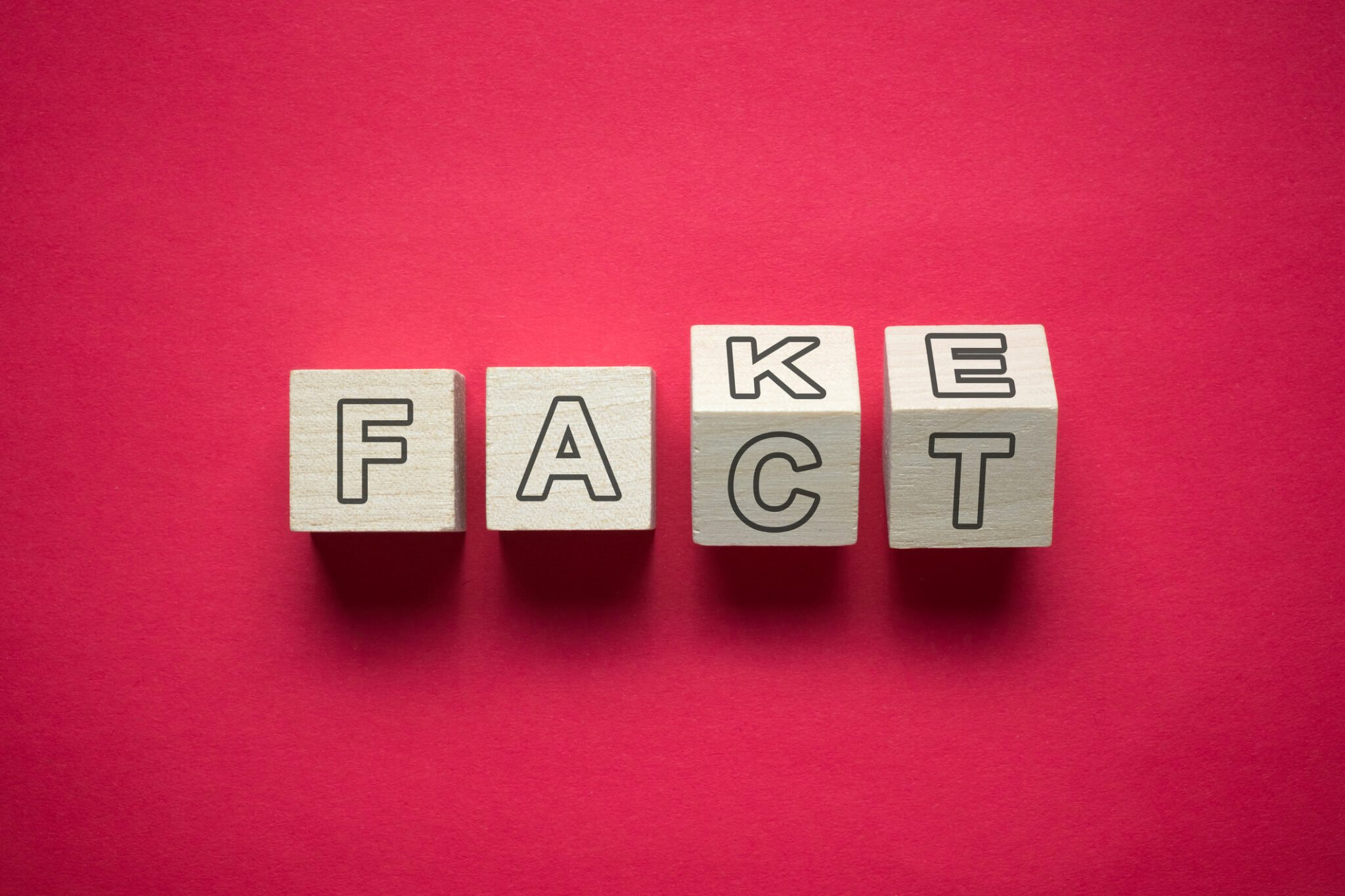 Propaganda. Spin. Misinformation. It’s all been around since Man could emit monosyllabic grunts. However, it has been said that what makes fake news particularly insidious these days is the profound speed at which false information is spread via social media. This is especially concerning in light of a study by Pew Research Centre (PRC) claiming that: “In 2018, one-in-five adults said they often get news on social media.” Facebook leads the pack.

Nonetheless, there is debate about the degree to which fake news, though widely disseminated and consumed online, can actually effect change in the world. Remember when the phrase “fake news” was popularised in 2016? Anti-Trump campaigners claimed social media had been flooded with fabricated stories to boost Donald Trump’s popularity and delegitimise Hillary Clinton. This, some believed, was the deciding factor in Trump’s win in the Presidential Elections.

The influence of fake news

But is this controversy about how fake news led to Trump’s victory, in itself, fake news? It’s no secret that fake news did the rounds on social media pre-election – and then some. Stories like “Pope Francis Shocks World, Endorses Trump for President” went viral. Just how viral? A study published in The Journal of Economic Perspectives (Allcott and Gentzkow 2017, p. 211) puts the number of pre-election Facebook shares of pro-Trump fake news at 30 million.

This speaks to the fact that as humans we love a juicy story, even if it was made up by teenagers in Macedonia to make a quick buck from Facebook ad revenue. That, unbelievable as it sounds, is not fake news. Take a look at this fascinating academic study, which analyses how enterprising folk in Macedonia – many in their twenties and with only basic English – managed to fool the world.

That being said, the verdict from economists Allcot and Gentzkow study is that fake news, despite that whopping 30 million shares, did not directly lead to Trump’s win. “Social media was an important but not dominant source of news in the run-up to the election,” they wrote. No doubt a Google search will reveal literature offering an alternative view. Does that mean we should call one or the other “fake news?” No. I’d say we should call it healthy debate.

While the jury’s still out on the Trump vs Clinton issue, there appears to be more consensus around the fact that the spread of fake news in social media presents a unique challenge in our times, with real-world consequences. We saw this with the #pizzagate incident. Yes, a guy pitching up at a pizzeria in North Carolina with an assault rifle because he believed the fake news that it was the hideout of a child trafficking ring is a pretty extreme example. But the line dividing indignation and action is getting thinner by the day.

What this seems to show is that issues that are inherently contentious and emotive are fake news fodder because, naturally, we want to be able to say: “See? I’m right. You’re wrong. Just look at this news story.”

Further to that, did you know that “Post-truth” was named Word of the Year by Oxford Dictionary in 2016? This was in response to the “highly-charged” political situation that year (including the Brexit referendum), according to a spokesperson. The definition: “Relating to or denoting circumstances in which objective facts are less influential in shaping public opinion than appeals to emotion and personal belief.” Welcome to the post-truth world.

There has been some discussion around how our views in today’s society are becoming more and more polarised. The United Nations released a statement regarding the “disturbing groundswell of xenophobia, racism and intolerance” globally. Perhaps it is just that social media has made this polarisation more transparent, or that social media itself gives rise to hate speech because we can hide behind our screens.

Regardless, it would seem that people with fringe views that would have gone unheard now have their very own soapbox. The Center for Countering Digital Hate claims that there are just 12 people (now called ‘The Disinformation Dozen’) “responsible for almost two-thirds of anti-vaccine content circulating on social media platforms”. It’s said The Disinformation Dozen have a combined following of 59 million.

Covid-19 has given rise to extreme divisions. The pro-vaxxers versus the anti-vaxxers. Parents who support homeschooling versus those who condemn it. 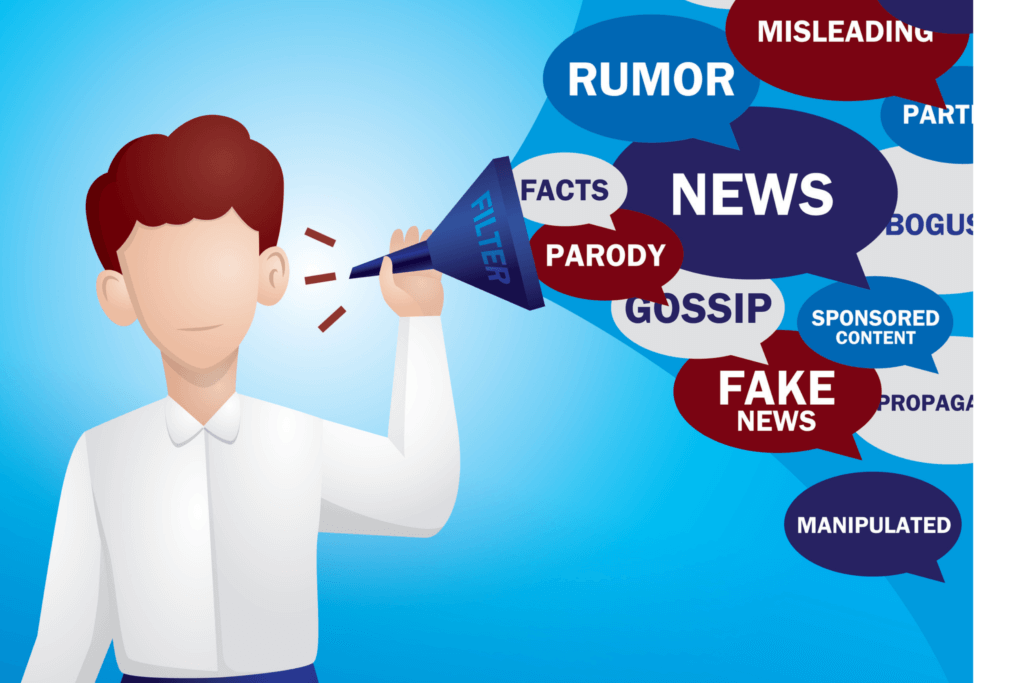 What does this have to do with fake news? Human psychology, it turns out. Let’s say you see a negative fake news story about a politician you dislike. You are more likely to be taken in because of what is called “confirmation bias” – the psychological phenomenon of believing something that confirms one’s beliefs.

Psychoanalyst David Braucher says this bias makes us more susceptible to fabricated stories, a trend compounded by the fact that we tend to share fake news that supports our worldview with our like-minded Facebook friends, and vice versa. Adding insult to injury, social media’s audience optimisation strategies mean that the more you look up news to support your particular ideology, the more of this type of information will appear in your feed. Braucher likens it to creating an “alternative reality”. If polarisation is indeed as big an issue as the UN says, this reality is very small indeed. About the size of a smartphone?

What is the antidote to fake news? According to PRC: “48% of US adults say the government should restrict false information online, even if it means losing some freedom to access/publish content.” We can see this already taking place in the measures Facebook has taken to clamp down on Covid posts.

The concern here then is whether fake news will one day be used as an excuse to silence rather than inform by those in power with less honorable motives.

So then what? I believe that the answer – or at least a sizeable piece of the puzzle – lies not just with governments and social media giants, but with us as individuals. How? By developing our critical thinking.

What does learning English have to do with this? At ELC, which is part of the University of Cape Town, our teaching methodologies are rooted in critical thinking. Rather than using a rote learning approach and “spoon-feeding” information, our teachers focus on eliciting language and encouraging students to engage critically with texts. This approach works. Why? Because by coming up with the answers themselves (through critical thinking), students have a greater chance of not just remembering the language points, but how to use them – and why.

Read our post on ELC’s English for Academic Purposes course.

In conclusion, if Fake News is a system that can be strengthened by individuals, it can also be weakened by them. As a second-language learner at a good language school, you already have the advantage of consistently flexing your critical thinking “muscle” in the routine study of English – yet another reason to keep up your studies.

Take a look at our excellent blog about Paraphrasing like a Pro.