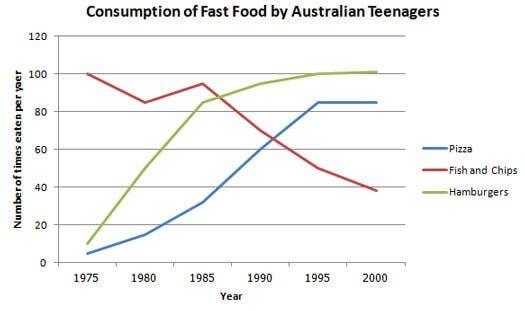 In our last post we looked at how to introduce, plan and structure your IELTS academic writing task 1 essay.  Based on the same graph as the one we discussed on Monday, here we drill down into the detail – what vocabulary and grammar do you need for this task?

Cohesive devices, also known as linking words, are essential to give structure to your essay.  The most useful linking words for this kind of task are:

In the example above, we would use them like this:

Body paragraph 1: First of all [consumption of fish and chips decreased]

Conclusion: Overall [consumption of fast food was higher in 2000 than in 1975]
2. Verbs + Adverbs, Adjectives + Nouns

To describe the change over time that we see in the graph, we use combinations of verbs + adverbs or adjectives + nouns.

Remember – always use past simple for verbs, and always include an article (a/an) for nouns.

To describe the changes over time which appear in the graph, there are two standard sentence structures you can use:

The noun phrase is the data that is represented in the graph, such as ‘the number of students in the class’, ‘the rate of employment’, or, in this example, ‘the number of pizza meals eaten by teenagers in Australia’.

It is essential that you include some actual numbers in you essay – this is what you are supposed to be describing after all.  When describing a trend, combine the sentence structures above with:

5. Put it all Together

Now, combine all the elements we have discussed to construct your essay.

The graph illustrates how much fast food was consumed by Australian teenagers over a 25 year period from 1975 to 2000.  Data for three types of fast food is included: fish and chips, pizza and hamburgers.

First of all, there was a significant decrease in the number of fish and chip meals consumed per year by teenagers in Australia.  It fell slightly by 5 meals per year between 1975 and 1985, and then declined dramatically from 95 meals per year to 39 meals per year from 1985 to 2000.

In contrast, the consumption of hamburgers by Australian teenagers increased rapidly by 90 meals per year, from 10 meals to 100 meals between 1975 and 2000.  Similarly, there was a dramatic rise in levels of pizza consumption, from less than ten meals per year, to approximately 85 meals by the end of the period.

Overall, teenagers in Australia consumed significantly more fast food in 2000 than in 1975.