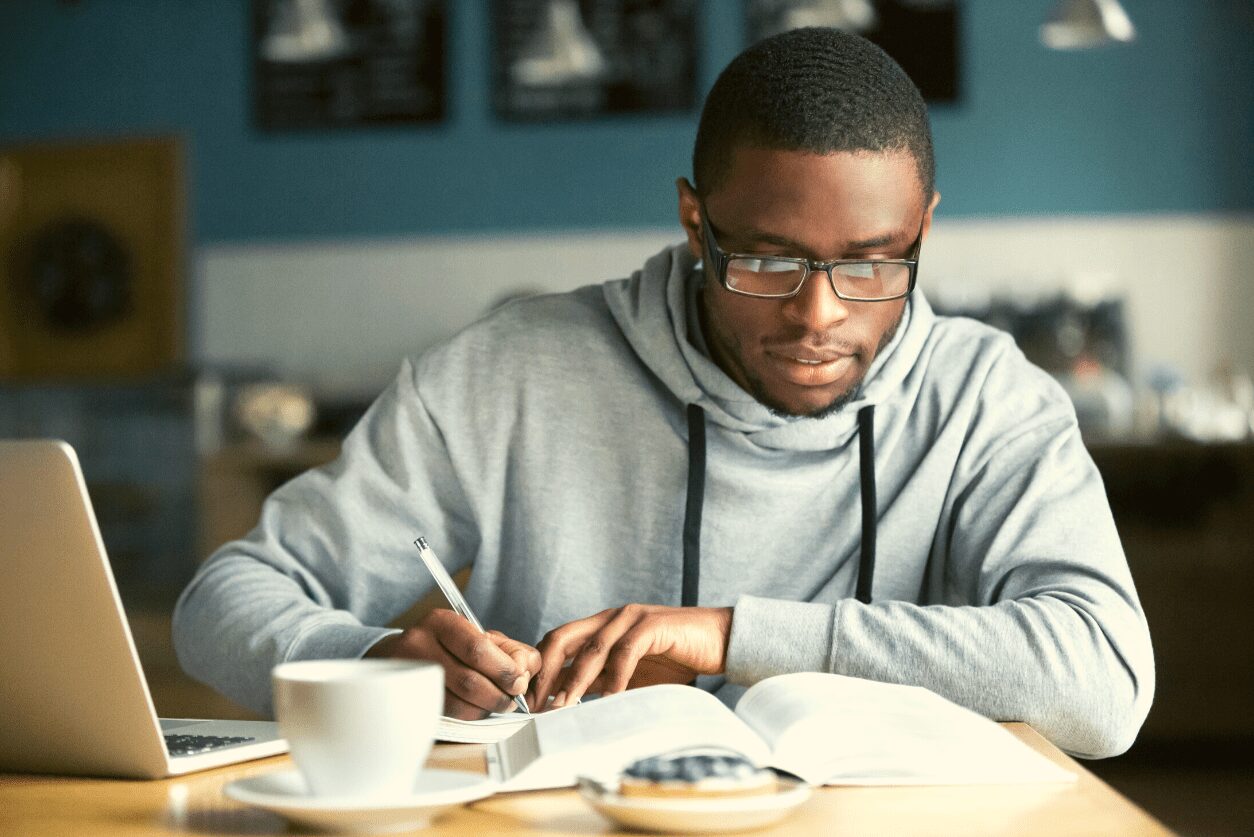 Need to use Academic English for essays, reports, presentations, etcetera, but finding it a slog? Move over to the fast lane. In this post, we explain what academic collocations are and why they’re so effective in academic writing.

I’ve often thought that the idiom, “To kill two birds with one stone”, meaning to achieve two aims through a single action, must titillate ornithologists everywhere. Teacher, why bring up such gratuitous violence, you say? What did a sweet bird ever do to you?

Well, a great way to improve your English is by studying “formulaic phrases“, groups of words that go well together, including collocations. Idioms, lexical bundles, and discourse markers are also in this category, but we will learn about these another time. According to the EAP Foundation: “Most writers estimate the level of formulaic phrases in English at between 30% and 50%, with one study suggesting that about one-third of academic writing is formulaic in nature, and close to two-thirds for spoken English.” This is staggering!

“Most writers estimate the level of formulaic phrases in English at between 30% and 50%.”

Therefore we can conclude that by learning collocations – two or more words that are used together – we can kill two or even several birds with one stone. (Cue gasps from the ornithologists). In other words, learning academic collocations can greatly improve your Academic English vocabulary and essay-writing. 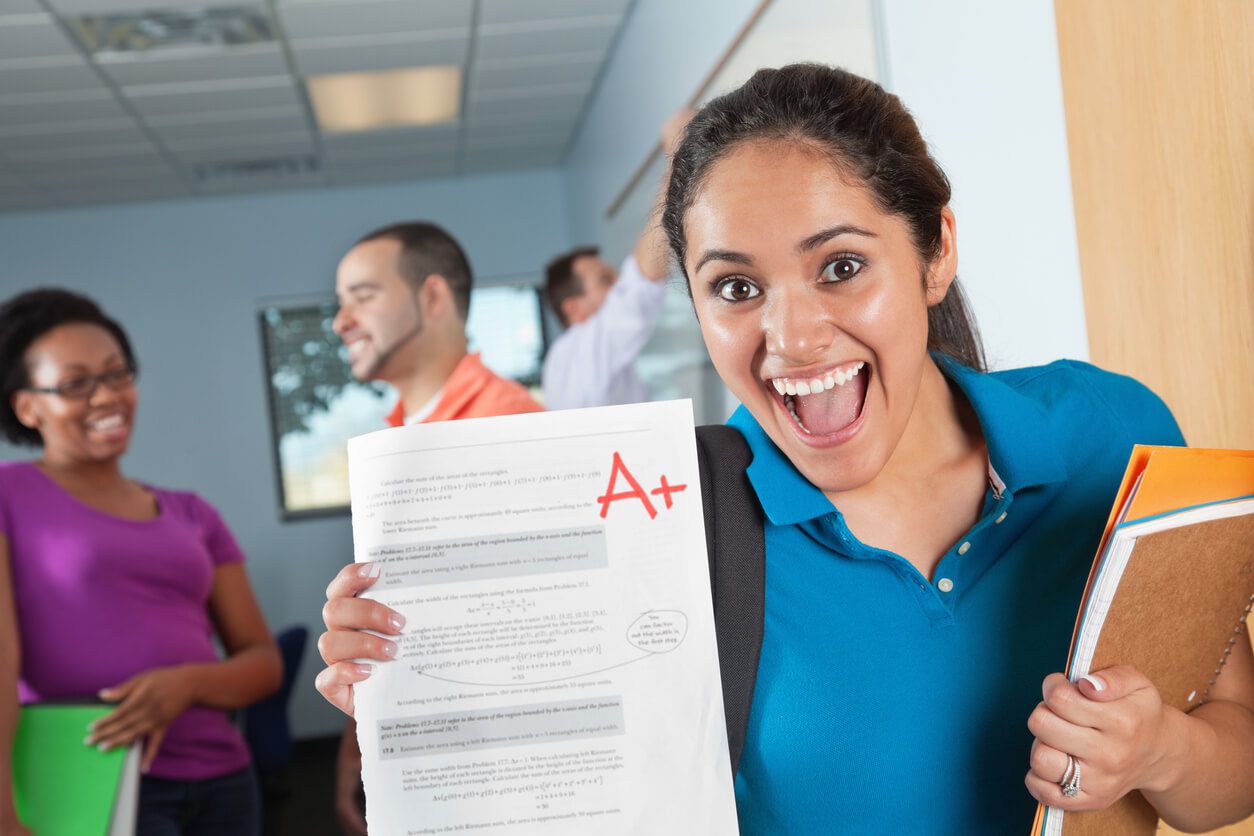 The Academic Collocation List (ACL) is your go-to list if you’re studying Academic English. This list contains 2,469 of “the most frequent and useful collocations” occurring in written academic English, according to the English for Academic Purposes (EAP) Foundation.

Some of these “smart collocations” could also be used in a General English context, but the majority are only suitable in academic scenarios, making this list an ideal tool for those wanting to build their Academic English vocabulary. But the million-dollar question is: Where do I start?

I would suggest grouping academic collocations by category. I’ve given two examples of categories below with associated collocations.

There are many collocations related to the degree to which experts believe something to be true, which are useful in academic writing. Study the image below, which includes some of these collocations on a scale from describing a hotly contested topic, to an issue which people are unanimously agreed upon. You can use these collocations to introduce issues in an essay. For example: “There has been considerable debate around the validity of the Presidential election results.” This could then lead to a synopsis of different expert viewpoints and studies.

You could also use these collocations to support the strength of your own argument in a for/against essay. For instance: “Advertising companies claim that vaping is less harmful to your health than smoking tobacco, however, this has been met with strong opposition by health experts. This essay will outline the key arguments against vaping and concur with experts who state that there is a lack of available evidence to support pro-vaping rhetoric.” 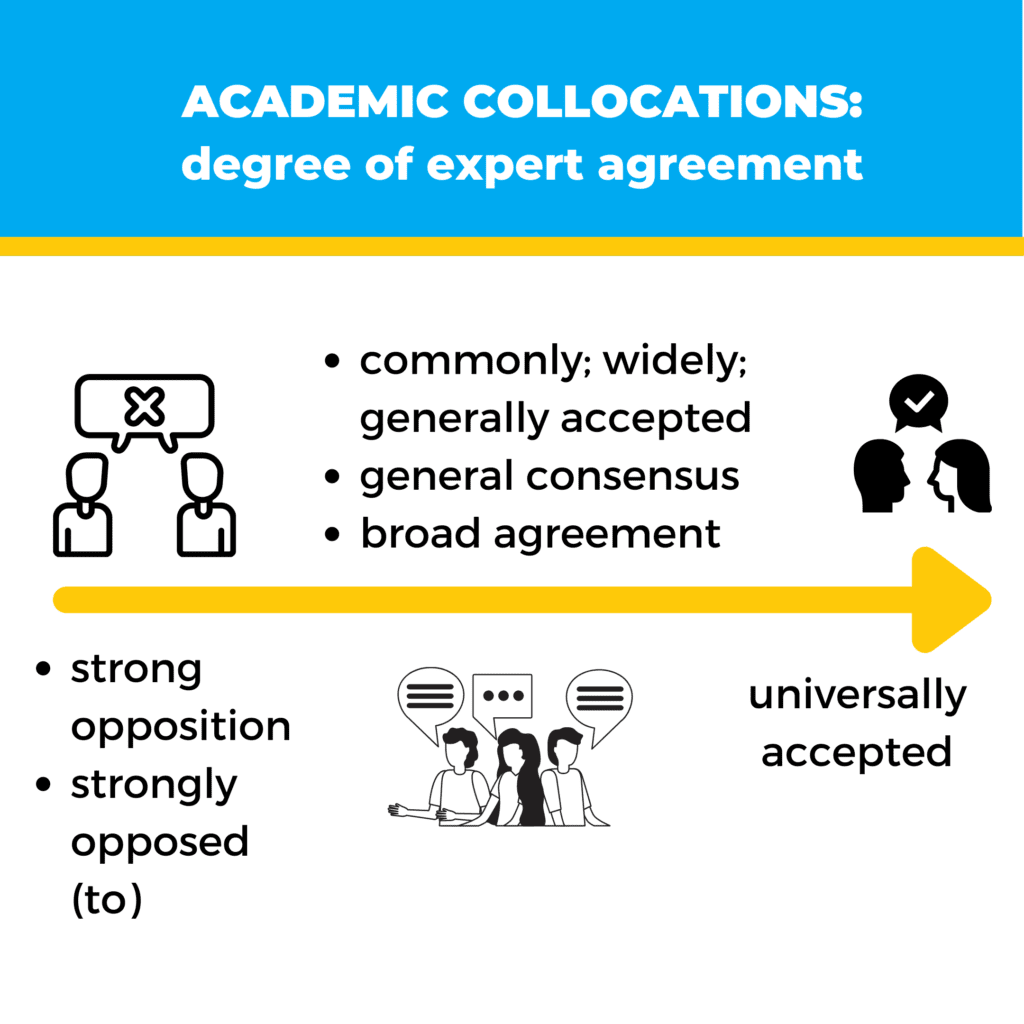 Let’s examine two examples of how to rewrite sentences to make them more suitable for academic purposes using the above collocations.

Everyone knows that the Earth revolves around the Sun. 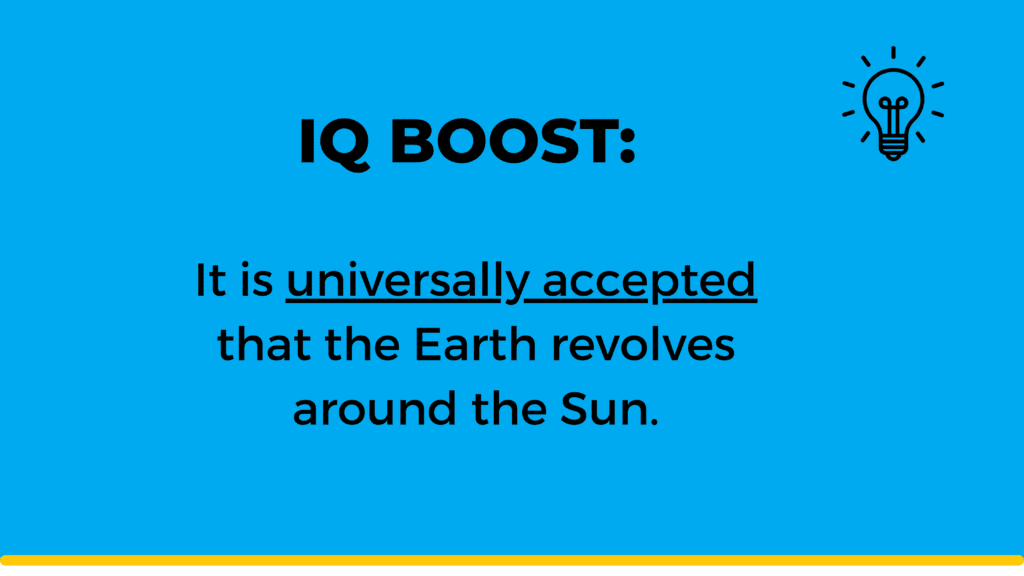 A lot of experts say that AI will replace more jobs. 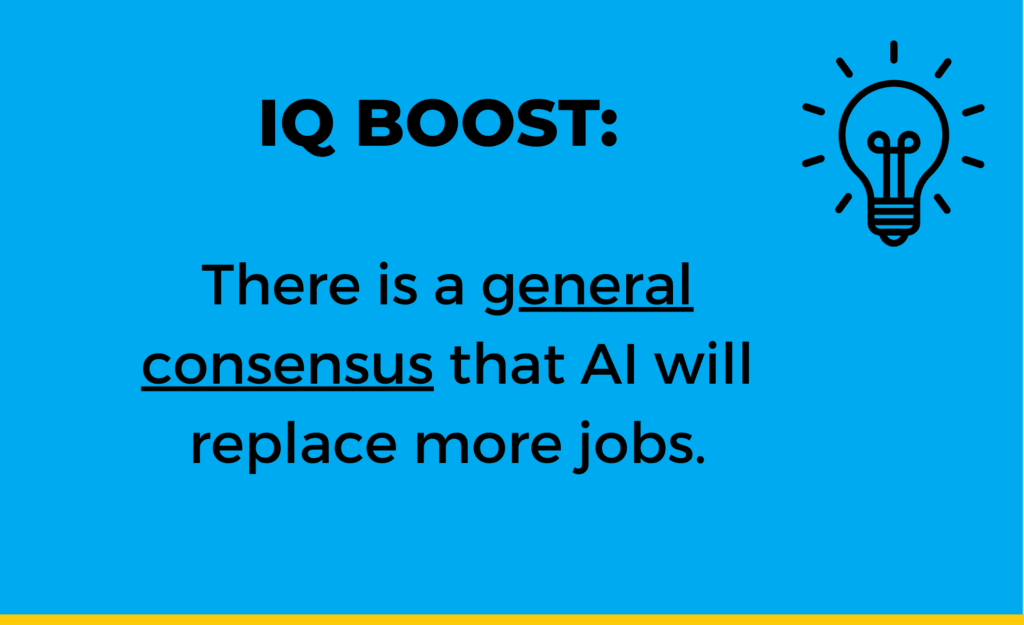 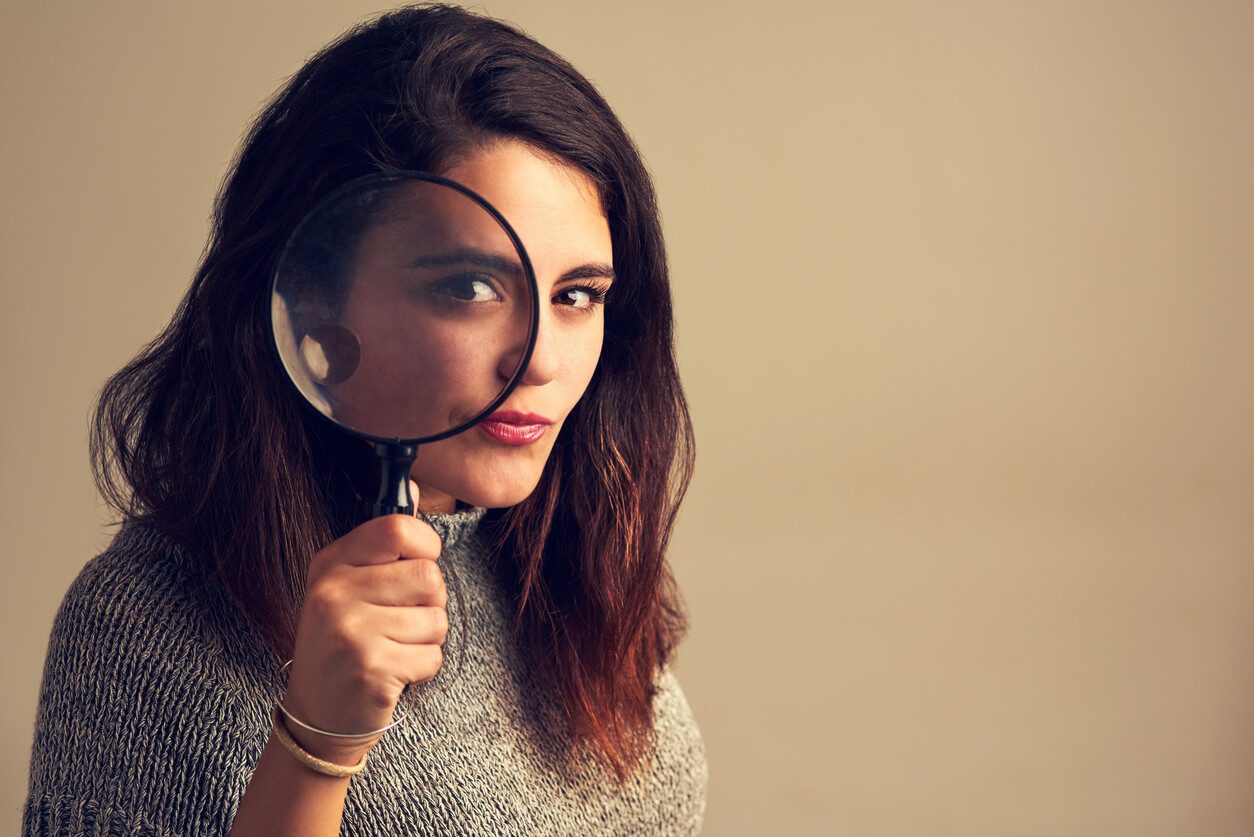 Let’s look at how to rewrite more examples using collocations in the “evidence” category.

Notice how we have also dropped the pronoun “your” here, which makes the sentence more formal.

In this case, “considerable” refers to the amount of evidence. “Clear evidence” or “compelling evidence”, on the other hand, refers to quality. These would be perfectly reasonable to use to talk about the adverse effects of blue light. But you probably wouldn’t use the latter to support your argument that smoking is unhealthy because “compelling evidence” refers to that which hasn’t quite been proven, and (duh) the adverse health effects of smoking are well-known.

Another useful academic collocation here is “available evidence” (sometimes “best available evidence”). This connotes that further studies may need to be done. For example, to quote literature on the Centers for Disease Control and Prevention website: “Available evidence suggests the currently authorized mRNA COVID-19 vaccines (Pfizer-BioNTech and Moderna) provide protection against a variety of strains.”

Then there is “anecdotal evidence”, and the list goes on. Don’t worry. The examples above provide a good starting point. 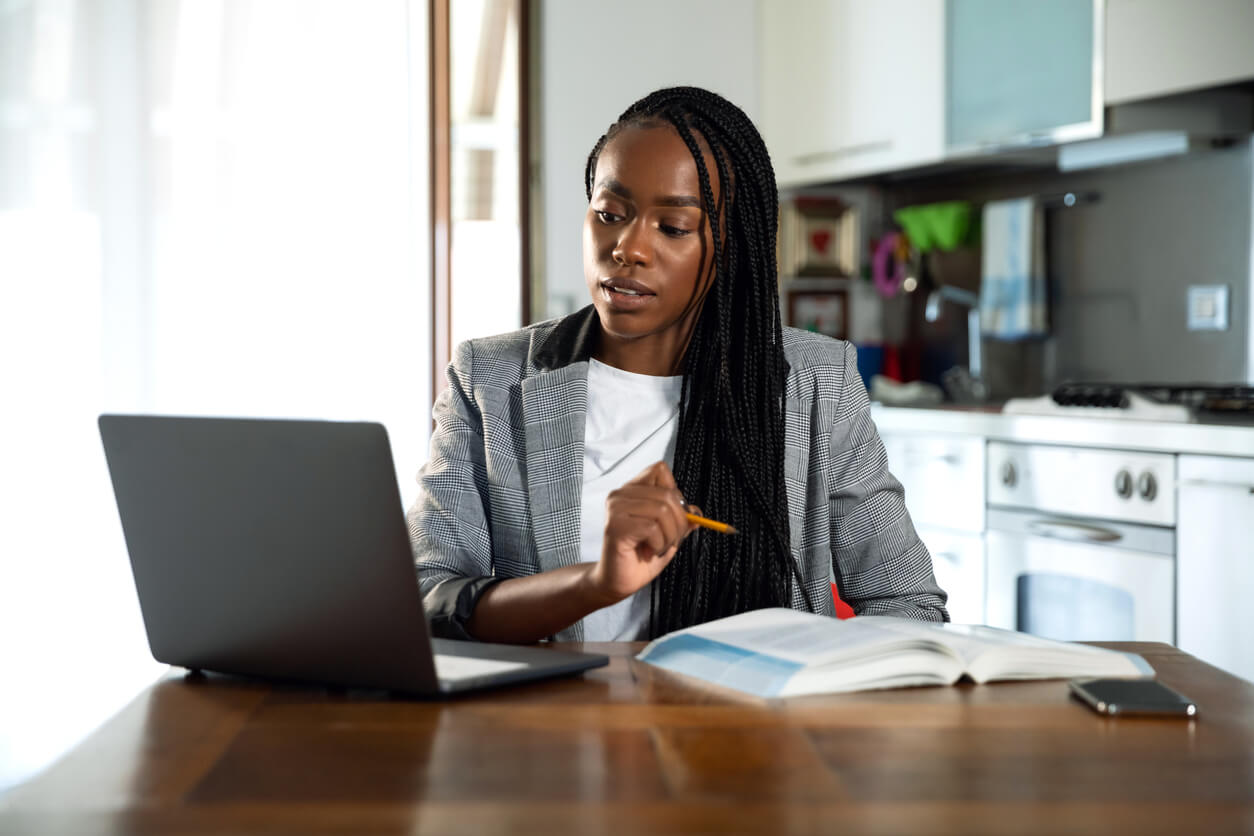 If ever there were a contest for sharp-witted collocations (a kind of Miss Universe for smart alecks), the adjective + noun format would steal the crown because it’s by far the most popular. Think of “academic achievement”, “active participant”, and “cultural diversity”.

The verb + noun format is the rather bitter runner-up, but she needed to accept responsibility and not raise questions about the verdict.

It stands to reason that learning these high-frequency format words is a useful starting point when studying academic collocations because a) you’re more likely to come across them in a variety of texts, and b) knowing the format aids recollection.

That said, it’s advisable to vary the form of your collocations to avoid sounding too repetitive. For example, if you’ve just used several adjective + noun collocations in an essay, throw in a verb + noun equivalent. For example, instead of saying, “There is considerable debate about X issue” (adjective + noun), you could say: “Some experts have cast doubt (verb + noun) on evidence related to X issue.”

There are other forms, of course, including adverb + verb, such as: “strongly agree/disagree”, however, in my opinion, this form is less effective in academic writing as it is less formal.

Certain words also take pride of place and are therefore useful to know. Did you know that there are no less than 35 academic collocations incorporating the word “data”? Clearly, academics have taken a shining to the word, but perhaps not quite as much as “high”, which has 52 associated collocations.

It’s also important to remember the words that are routinely associated with collocations (the groupies if you will), including prepositions. For example, it’s correct to say, “rely heavily on”, but (be) heavily influenced by”. We can say, “a significant number of students” but “a significant amount of (water/amoebae/kryptonite).” The word “tendency” will happily hang out with “to” but won’t be caught dead with “for”.

There are no less than 35 academic collocations incorporating the word “data”. But even data is outranked by the word “high”, which has 52 associated collocations.

In conclusion, learning academic collocations is a brilliant way to improve your Academic English vocabulary and writing. You can start by grouping them under a category by following our method described in this post, or whichever method works for you.

Just whatever you do, please leave any birds unharmed.