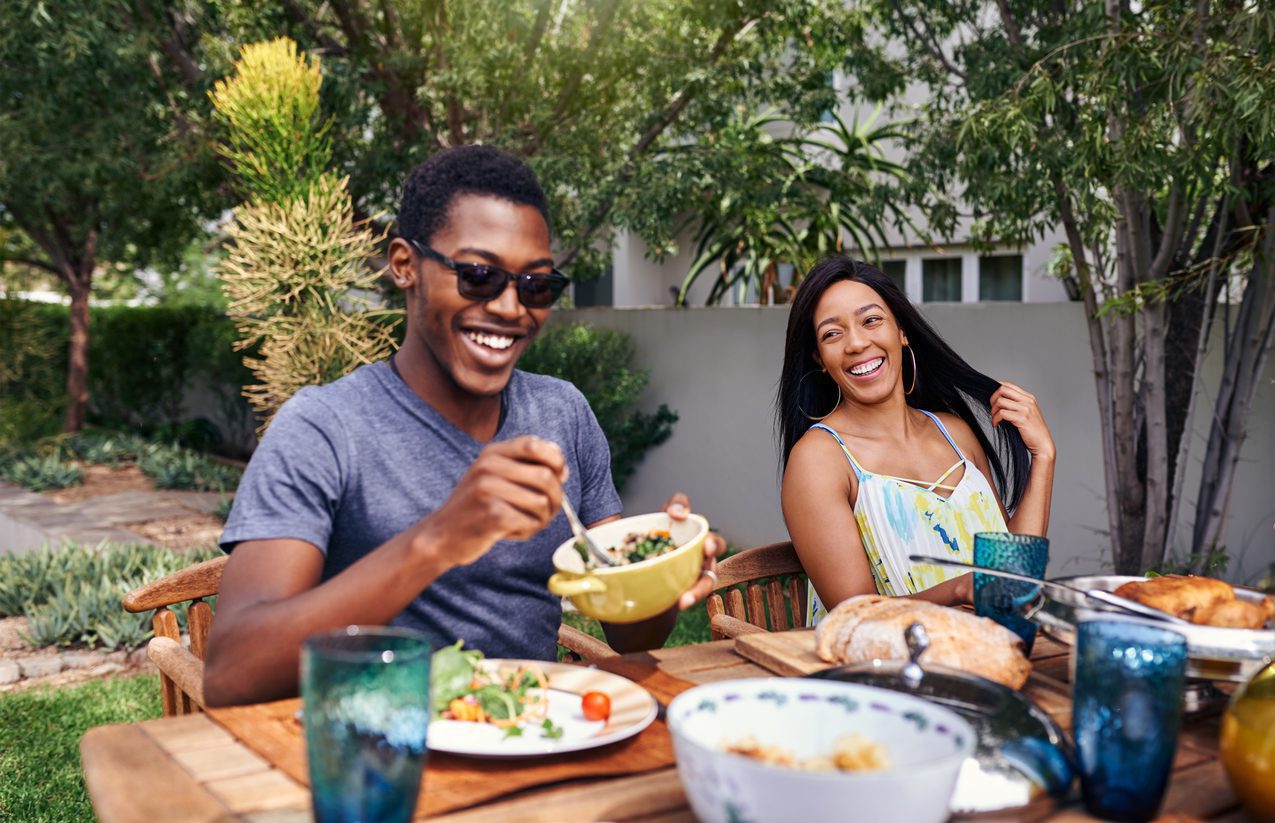 At the end of the 15th century, the Dutch East India Company sent ships from Europe around the tip of Africa to the Far East to explore the lucrative spice trade. The Cape of Good Hope became a colony of the Netherlands. Dutch settlers established farms to supply food for ships passing en route to the lands of tea and spices. The Netherlands had previously colonised South East Asia, and the people that they had enslaved were sent to the Cape to work on the farms. Many of these people were from India, Ceylon and Indonesia. Others came from Madagascar and East Africa. Many were Muslims, and they brought their religion with them. Collectively, these people became known as the ‘Cape Malay’. Visit the Slave Lodge to learn more about this history.

On the local front, meaty menus have taken centre stage. ‘Shisa Nyama’ in isiZulu means ‘hot meat’ and has become the name of many South African eateries where you stop off, choose your meat and have someone ‘braai’ or barbeque it for you. Although the primary item on the menu is meat, a bit like the idea of a ‘braai’ (discussed later), there are other local dishes on offer.

Chakalaka combines vegetables such as peppers, carrots, onions and tomatoes into a spicy relish which is often served at braais/barbecues and Shisa Nyama eateries to accompany ‘pap’.

Pap is a local staple, similar to Italian polenta, made from maize (corn). 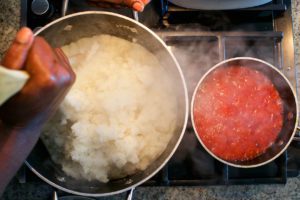 Morogo (a Setswana word) or imfino (an isiXhosa or isiZulu word) are green leafy vegetables or wild spinach found growing in Southern Africa. These nutritious leaves are cooked as a side dish to have with pap, uphuthu and meat.

Umngqusho, pronounced with the beautiful, hollow ‘gq’ click sound, is made from samp (maize kernels) and sugar beans cooked with onion, garlic, bell peppers and spices.

Uphuthu is maize meal cooked to a crumbly, couscous consistency and eaten with meat and gravy, savoury beans or sour milk (also known as imasi, similar to natural yoghurt).

Samoosas are served as starters or for a snack anytime. These deep-fried pastry triangles are filled with spicy meat or vegetables.

Tomato Bredie is a slow-cooked lamb stew infused with spices.

Smoorvis is a smoked snoek dish. The fish is taken off the bone and cooked with onion, chilli, tomato and potato. Rice is cooked separately then folded into the mixture, served hot with a squeeze of lemon.

Sambals, similar to salsa, with finely chopped tomato, carrots, onions, chillies and seasoned with salt and vinegar accompany spicy dishes. Flatbreads, called rotis, are used instead of cutlery to scoop up mouthfuls of curries and stews.

For dessert, try Falooda. A sweet rose-flavoured milkshake topped with ice-cream and softened basil seeds. Then there are koeksisters. Koeksisters literally translates to ‘cake sisters.’ These treats are small balls of dough deep-fried then immediately dropped into a sugary syrup. They’re covered in coconut just to add that extra magic. A warning: one is never enough.

On Hiddingh campus, give Fay’s Cafe a try! Otherwise, visit Biscuit Mill Food Market on a Saturday for lunch and snacks and music.

There are sometimes questions about which tradition a dish truly belongs to. Frikkadelletjies or savoury meatballs and bobotie have been claimed by both the Afrikaners and the Cape Malay. Fortunately, the argument isn’t serious. Instead, everyone agrees that as long as both are available, it doesn’t matter where they originated from.

I’m claiming Bobotie as an Afrikaner dish because I’m of Afrikaner descent and my mama made it like a pro. Bobotie consists of spiced mincemeat with raisins or sultanas added to the filling and an egg-based topping. This baked dish has a definite Cape Malay influence with flavours of curry, turmeric and almonds. The spiced mincemeat can be replaced with lentils to make a vegetarian option.

A potjie (‘pot’ in Afrikaans) is a stew of meat and vegetables, slow cooked in a three-legged cast-iron pot over the coals of a fire. Seafood, fish or just pure vegetables can also be found in potjies.

Boerewors or farmers’ sausage is made from beef, coriander, cloves, and nutmeg and is one of the meats served at a braai. 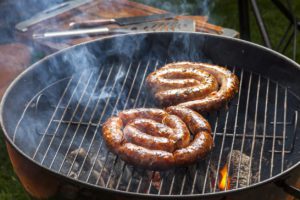 Biltong is dried strips of spiced beef or venison. There’s a sausage version too known as ‘droewors’. Both are served as a snack at social gatherings.

There are lots of delicious dessert recipes too. Fluweelpoeding or Velvet Pudding has a baked custard filling with apricot jam which is topped with beaten egg whites to form a delicious meringue layer. Its silky texture gives it the name. Koeksisters, similar to those mentioned above, are made with dough, deep fried and dipped into a sugary syrup. Unlike the Cape Malay koeksisters, they are not rolled in coconut. Melktert or milk tart is a cinnamon topped custard tart in a sweet shortcrust pastry for tea or dessert. My mama made this too. 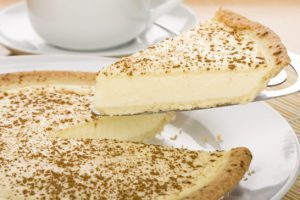 Pampoenkoekies are pumpkin fritters served with cinnamon sugar for afternoon tea. Finally, vetkoek or ‘fat cake’ is a deep-fried dough ball stuffed with a savoury filling such as minced curry and chutney. They are also served as a sweet treat with cinnamon sugar.

This very sociable tradition draws families and friends together around an outdoor fire. Meat is an essential ingredient although vegetarians have influenced the menu with sweetcorn and mushrooms on the grill. Spicy boerewors or sausage, sosaties (lightly-curried meat kebabs), lamb chops and fillet or steak are cooked to perfection on the braai. The meat is served with garden salads and fresh bread and rolls. It’s a warm and relaxed atmosphere, with lots of delicious food.

The braai tradition is so popular that our National Heritage Day (on 24th September) is called ‘Braai Day’ which we celebrate together.